City tour gives guests an excellent chance to get acquainted with one of the oldest and the most beautiful cities of Eastern Siberia. We will start our excursion in the historical center, where 340 years ago the first village of Irkutsk was founded; we'll see ancient Orthodox churches there, walk along the Bridge of Love (where lovers make their appointments and make wishes for future life) down to the shore of the Angara River. After a short stop in this remarkable place we'll continue our excursion and visit the most important and the biggest Orthodox Church of Siberia - Sign of the Cross convent, which is famous for its ancient one-of-a-kind iconostasis. Intricate patters of frescos on the Convent's walls, ancient icons of orthodox Saints and celestial singing of church-choir will never leave anyone indifferent. Then we'll drive back to downtown along the main streets of Irkutsk, pass by shopping area and finally come to the shore of the Angara River - the only river that flows out of Lake Baikal and brings its crystal waters to the Arctic Ocean. Locals and guests of the city always chose the Angara's embankment for their evening strolls. It's such a picturesque and relaxing place that it never fails to charm its visitors! During our last stop we'll also stop by the monument to the most beloved (for Siberians) Russian Tsar - Alexander III, Museum of Local History and the Governor's House.

Decembrists were participants of rebellion, which took place in St. Petersburg on 14th December 1825. Their main aim was to set some limits on power of the Russian Tsar and to abolish serfdom that was still practiced in Russia. The rebellion was suppressed heavily and its participants, who mostly were young people from noble Russian families, offices, men of letter and scientists, were exiled to Siberian, Irkutsk. For more then 30 years Decembrists have lived in Irkutsk and their impact on cultural life of Siberians cannot be overestimated.
During excursion we will visit one of Decembrists' house, which used to belong to Prince Volkonsky. You'll have a chance to have a look at the interior and exterior of the house, see some private things that used to belong to Volkonsky's family and other Decembrists and certainly you'll learn a lot of facts from life and deeds of these honorable rebels. 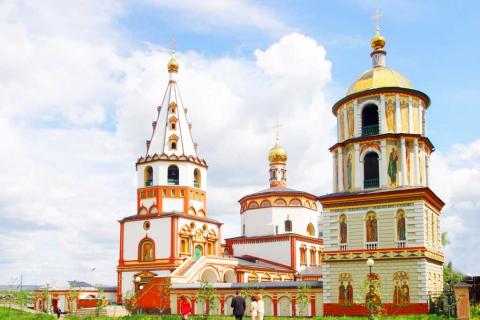 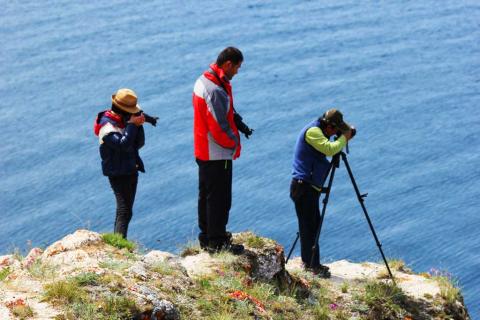 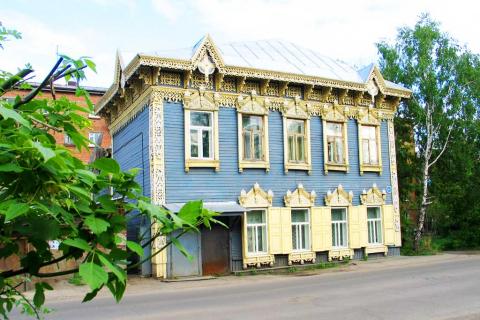 Lake Baikal is righteously regarded as a unique masterpiece of Nature and respectfully called by locals "Sacred Sea". It's a Lake of Superlatives - the deepest (1 637 m deep), the oldest (35-37 million years old) and contains the biggest number of endemic organisms living in it (3/4 of the total amount). It's worth mentioning also that Baikal is the biggest fresh water reservoir on the Planet and contains 22% of the World's fresh water supplies and 80% Russia's fresh and drinking water.

Olkhon is the third-largest lake-bound island in the world! It is by far the largest island in Lake Baikal in eastern Siberia, with an area of 730 square kilometers (280 sq mi).
It is a great place to get away from civilization, feel the nature, live just next to Baikal lake, and enjoy magnificent views and new places.
The island's comparatively small territory is a combination of taiga, steppe and even of a small desert. Its flora and fauna are highly endemic and unusual. Olkhon is the home of many tribes and peoples of Central Asia. One of the legends connected with the island says that Olkhon is a place where the "conqueror of the Universe" was buried. That was how contemporaries used to call Genghis Khan, the great Mongol conqueror of the early 13th century.

In the afternoon - arrival in Khuzir Village, which is known to be the biggest village on the Island with its population of 1 300 people. Accommodation in a Farmstead.

Traditional Siberian food. Guests will be offered to try the most well-known Baikal fish - omul. It is a type of salmon-fish, which can be found nowhere else but in Baikal. Omul meat knows no rivals according to its tenderness and taste.

Shaman (or Burkhan) Cape is often called "visit-card of Olkhon Island" by the locals and guests. Today the cape has the status of a state natural-historical monument.
The two white marble rocks of Burkhan, linked by a depression, are covered by bright red lichen underlining the whiteness of the marble cliffs. The tops of the cliffs are slightly bent towards the mountain range, as if ready to withstand "gorny" - the worst of Baikal's winds. Over many centuries, water and wind cut out an open-ended cave through the Burkhan rock closer to the shore, also called Shamanskii.
In thenearest proximity to the cape there's a nice observation point, rom which one gets an excellent view of Burkhan itself and the impressive surrounding landscape. Between the two promontories there is a beautiful small bay. A few larch trees, able to withstand the fierce Baikal winds, give the landscape a fabulous colouring. To the west of Burkhan, the stone helmet of Bogatyr (hercules) rock rises out of Baikal's waters. 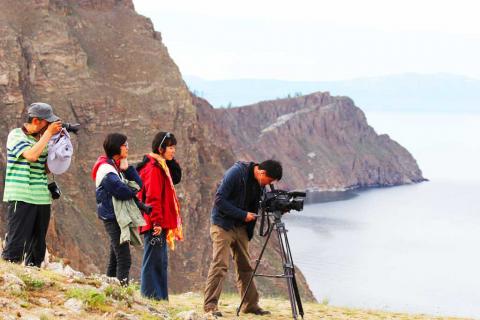 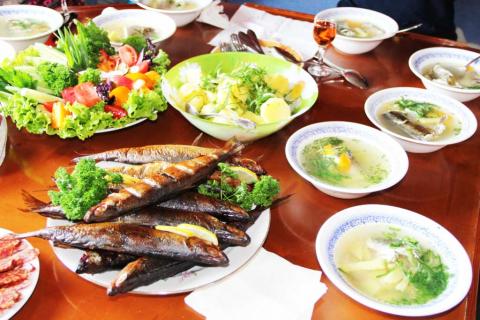 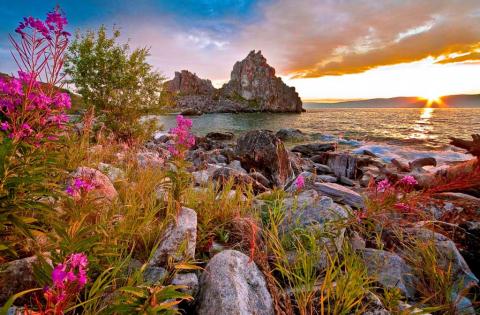 Baikal seems to be exceptionally beautiful and mysterious at dawn. Sun rays sweeping through the darkness and brilliant glistering of water will never fail to charm.

The uniqueness and severe beauty of Khoboy was fittingly valued by the ancient islanders, - Khoboy was considered sacred and served as a place where religious rights were acted out. On enormous boulders, jutting out of the waters near the cape, seal set up their haul out. Today, the cape is officially recognized as a natural landscape-monument. In winter, Khoboy turns into a fabulous ice castle. Heavy autumn waves breaking on the cape stay on the rocks in ice pillars sprayed into weird forms. Two wave-hollowed grottos become the halls of this ice palace, as seen from the north of the cape. On the side of Big Baikal, not far from Khoboy, cracks and fields of massive hummocks form each winter.

Food, cooked on open fire, is offered to guests.
Today you will try traditional fish-soup - Ukha. Ukha is made of various species of Baikal fish, boiled together with potato, greens, bay leef, dill and black pepper. Cooking on open fire makes Ukha exceptionally delicious and adds a very special aromatic aftertaste. Along with the soup, you'll be offered some vegetable salads, light snacks and sweets.
Siberian Tea, made on open fire, will be another specialty of today's lunch. Tea after a nourishing meal is considered a delicacy and drinking it is a sacred action. Local Siberian herbs are added to tea in order to make it more aromatic. 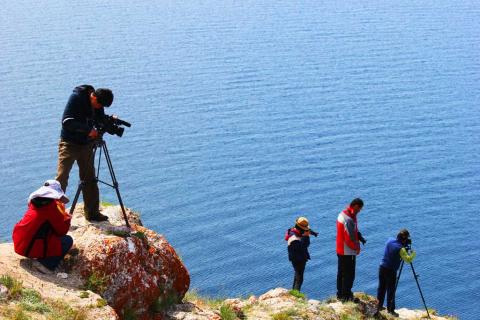 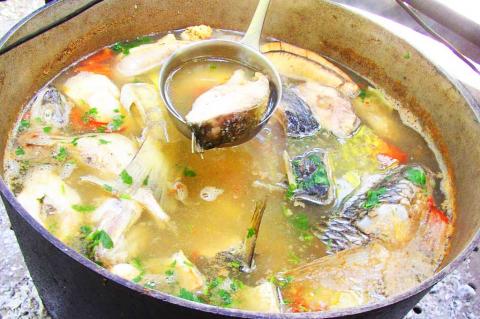 Shamanists' Culture in Eastern Siberia. Visit to the museum of Local history, where guide narrates about the culture of local Siberian people - Buryats, their folklore and main belief - Shamanism. Folklore concert and meeting with the Shaman will be offered to guests, too. 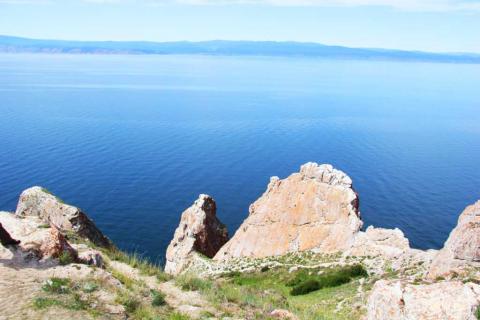