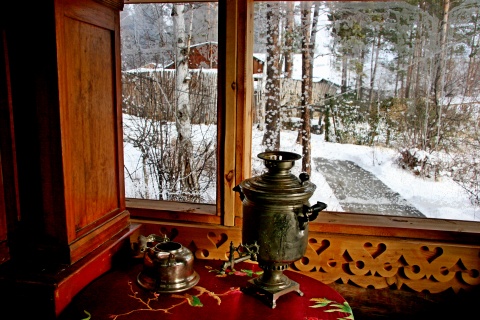 Nowadays, we can't talk about Siberia without saying some words about Siberian cuisine. It differs from all the other throughout the world. The food is very substantive, delicious and contains a lot of calories.

Due to the huge size of the country, almost limitless natural resources, life in the wilderness of Siberia was always more free and more prosperous than life in European Russia. Because of this freedom and abundancy of local food products, Siberian cuisine originated as a rich mixture of European and aboriginal dishes.

Meat – at the beginning of the 20th century, meat was one of the main features of the Siberian menu. It was always on the table. The most important meats were beef, lamb, chicken course and goose. Meat dumplings of "pelmeni" are the main course of Siberian cuisine. Their cooking takes a lot of efforts; it is a real art to prepare minced meat and dough. It is usually preferable to use 3 sorts of meat: venison, pork and lamb for filling. It is worth mentioning also that many vegetarian variations of pelmeni are available as well. There is one interesting tradition connected with  cooking of pelmeni - sometimes a coin or some pepper is put in one of the dumplings. It is a great fun to watch a person who finds it while eating and it means that this person gets lucky for the whole year!

One of the most popular traditional foods in Siberia is aspic or meat jelly, called kholodets. It comes from the legs and ears of cows and pigs that are boiled for long time over a low heat. The meat is then cut off the bones, chopped into very fine pieces, and covered with its broth. Usually onion, garlic, and black pepper are added, as well as carrots and other root vegetables. Especially delicate are the kholodets made of duck, goose or chicken meat, which required the most laborious preparation. Kholodets is usually served with very hot Russian mustard or horseradish sauce, often as a cold meal accompanied by vodka. 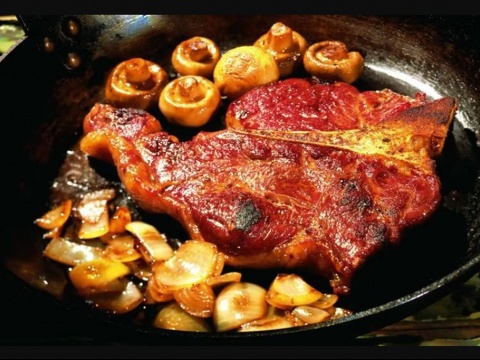 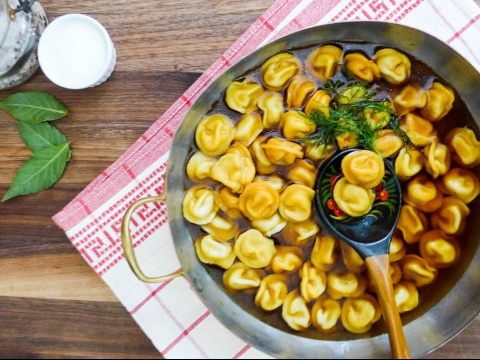 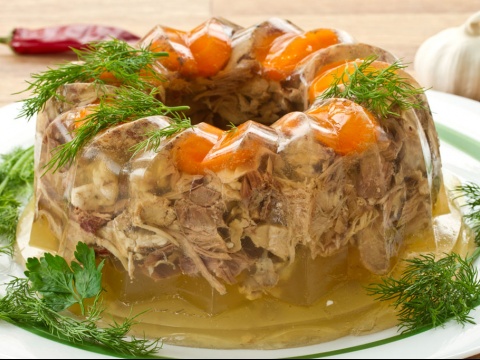 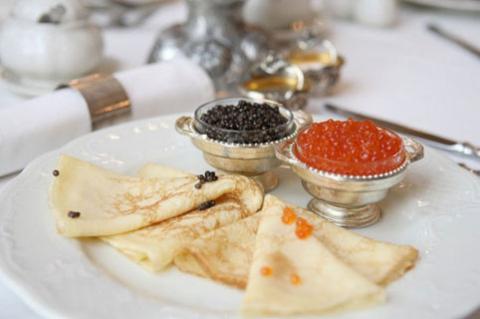 Fish. Fish is a plentiful and favorite food of native Siberians. It is used for ukha (fish soup), pies, flying and for pickling. Siberians love also purefully Siberian dish, which is called "hot smoked omul". Caviar in Siberian cookery is not just a delicacy but also an everyday food. Locals make feat round caviar cakes – usually there cakes are just pure fried caviar; sometimes with the addition of chopped onion, black pepper, and a little flour. Fresh sterlet, sturgeon, salmon, or pike caviar is served slightly salted and mixed with fresh chopped onion.

Pirogi, pirozhki and bliny. Leavened dough is widely used for pirogi (large pies) and pirozhki (small pies). Pirozhki could be fried or baked and stuffed with potatoes, carrots, green onion and eggs, liver, minced meat, fish, or fresh or dried berries (black currant, raspberry, bird cherry, haws) mixed with malt. The Siberian analogue of pizza was a round, flat pie called shangi, which was topped with cottage cheese and sour cream and then baked.

Many different recipes exist for bliny (large thin pancakes). These could be made of wheat or rye, leaven or unleavened, and some buckwheat flour, milk, and eggs. Jam, honey, sour cream or caviar could also be added.

Milk and egg dishes. Households of Siberian usually had many milk cows. Tvorog (cottage cheese) and smetana (sour cream) were mixed together to make a popular breakfast dish (a kind of thick yogurt) that was often eaten with honey or berry jams.

The reddish soup "borsh" is well-known as a trademark of Siberian culinary traditions.

One of the popular but unproved legends says the first-ever borsh was cooked by the Cossacks in 1637 during a two-month siege of the Azov fortress in Southern Russia, which was occupied by the Turkish army. Feeding four thousand Cossacks in a camp was problematic, so they collected anything edible they could find and put it all together. Everyone liked this thick and nourishing mix of vegetables and meat!

Despite its centuries-long history, there is no common recipe for borsh. Each Siberian family cooks it in its own way, passing on the secret from one generation to another. The most important thing about preparation is that the soup must be both brightred and clear, with the fat on the surface slightly orange. 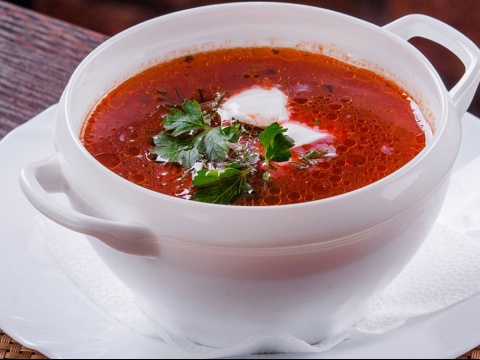 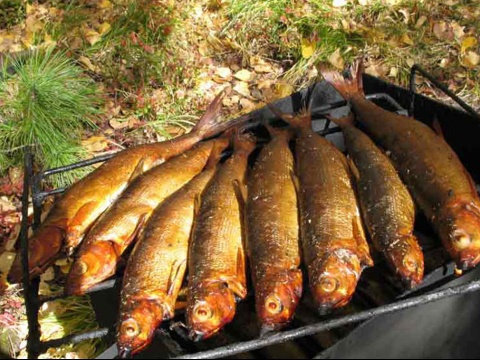 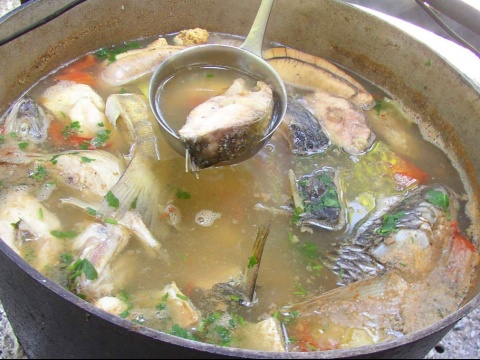 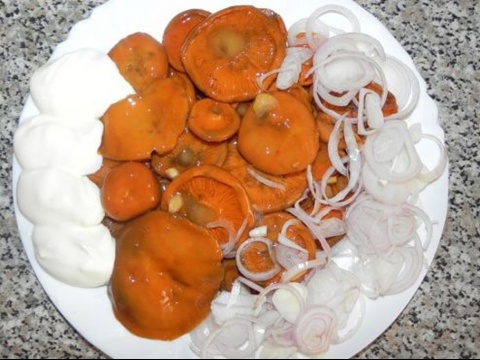 A classic borsh recipe includes cabbage, potato, onion, carrot, tomatoes, garlic, beef and pork. These ingredients are usually long-stored and contain all necessary nutrients. The main borsh's ingredient is beet-root, that's why the color of this delicious soup is red.

Winter is a perfect time for this nourishing, delicious and warming up soup! Borsh is usually served with sour cream, raw garlic, dill and black bread.

This "Ukha" soup was highly praised by Ivan the Terrible – who wasn't easy to please.

Sauerkraut is a purely Siberian snack which is reach in vitamins and helps to stay healthy during long Siberian winters.  It is made from cabbage (and carrots) that is absolutely fabulous for health! A few of its many healthy attributes: it is high in probiotics that aid the digestive and immune systems, it contains all the enzymes inherent in raw foods, and it has lots of vitamin C.

Sauerkraut is often flavored with apples and such local berries as cowberry and cranberry.

Pickled mushroom swith fresh greens, onion and sour cream, salted tomatoes and cucumbers are always served as a starter for lunch and dinner. 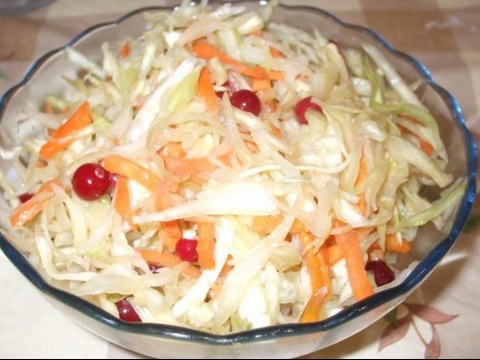 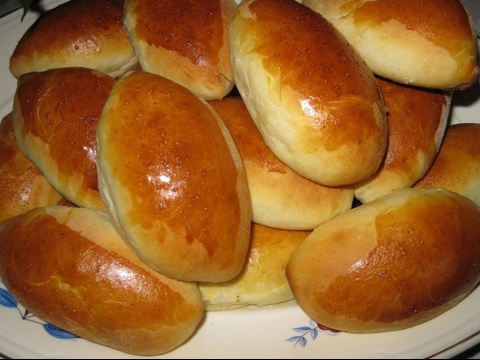 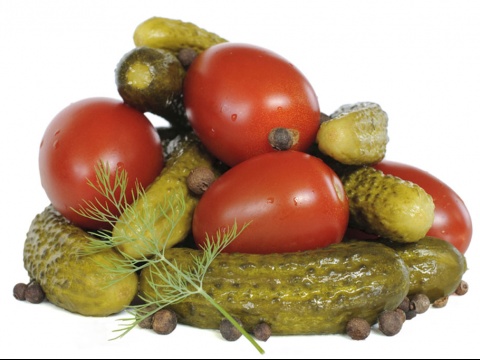 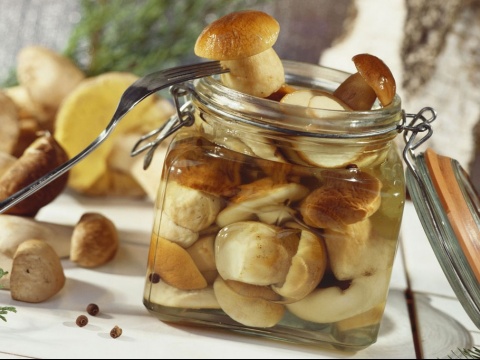